Writers all know the feeling:

You give your manuscript to a trusted critique partner, and wait with bated breath.

It comes back covered in red ink, but that’s not really the end of the story, is it?

The red ink reminds me of a practice that used to be popular in the Germanic countries: academic fencing.

Quick history lesson, academic fencing is a form of swordplay intended to show the worthiness or manliness of the fighters. There were no winners or losers. The two fighters would stand a fixed distance from each other and attempt to strike the other. 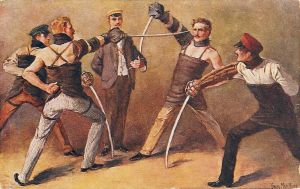 The strikes were aimed at the face, specifically the left side. The strike, and subsequent scar, were called Schmitte, which means smite.

In the writing world, we love to hate the red ink. Hate to see it, hate to find out what it says. But we use it to build the character of our works. Knowing what’s wrong in the eyes of another reader helps us firm up soft spots, leaves the manuscripts with scars that are more pleasing to read.

So perhaps we should start looking at the red ink as our own Schmitte, looking forward to the after effects that mark our piece as better than before.

What are your personal feelings on the Red Pen?