You’ve saved the world, escaped an island with priceless treasures, and done them both with friends. But you haven’t tested your mettle against a real opponent yet. Enter Go, a traditional strategy game that developed more than 2000 years ago in China. 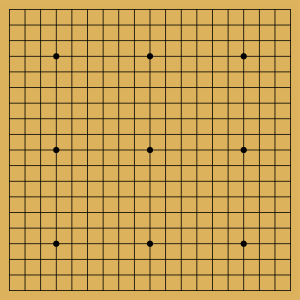 The game board is traditionally a grid of 19X19 lines, with every intersection being a legal space for a play. The turns are simple alternating affairs in which each player places a stone (game piece) on a point (intersection).

If you ever surround one of your opponent’s stones (Or a group of stones) you capture them, removing them from the board.

The only other rule besides the above two is the rule of ko, which for American players is simply stated as ‘The board can never repeat the same position twice.’ This is like one of the stalemate rules in chess.

The winner of the game is the one who controls more of the board by surrounding it with their stones. Often, I tell people to imagine it like you and your neighbor are building fences, and you want the biggest yard.

In the title of this post, I reference The Divine Move, which is the goal of a character from the comic Hikaru no Go. The Divine Move being the ‘ultimate move of Go’ and nearly unattainable. The character, Sai, was a ghost who had been dead for thousands of years, and yet had not yet obtained the Divine Move. It drove his obsession and caused him to push his host, Hikaru, to learn more about the game.

The truth is, Go is an incredibly deep game where a difference of one unit of space can mean the difference between a great move and a bad one. It has at least as much depth as Chess, and has kept up over these last few millennia drawing more players into it. Of course, the strategy has evolved as well, and I couldn’t even begin to scratch the surface of that topic if I blogged for years.

Have any of my readers even heard of Go? What do you think of the remarkable simplicity of the rules when compared with its depth?

4 thoughts on “The Divine Move: The Game of Go”