I was going to write about a new game this week, but I realized when drafting it that many of the concepts I’d be working with wouldn’t be familiar to people who hadn’t played tournament TCGs before, and considering most of you who read my game posts are not avid gamers, I’ll need to give you a primer on Trading Card Games, and the various game play formats that are involved.

The genre has many names, depending on what each game’s marketing department felt would help. Trading and collectible card games are the exact same format of game. There’s another name out there, the customizable card game, which is related either to TCGs, or to a genre that developed from them, known as Living Card Games. Regardless of what they’re called, all of these game genres of a similar approach: Each player brings a customized deck of cards to the game in order to play. Outside of that basic approach, the games have developed in numerous ways. 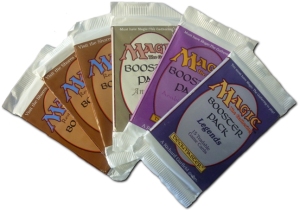 The traditional style of TCGs is to be sold in ‘booster packs’ of various sizes, Magic: The Gathering uses a 15 card pack as their base distribution. Each pack has a certain break down of rarities, set by the producers of the game, with each card in a slot being randomized. Each game has a minimum deck size, and sometimes a maximum deck size. Generally, to enforce a balance in the decks, each game has a limit on how many copies of any one card you put in your deck, commonly four, though three copies is slowly catching on among the games.

LCGs (Living Card Games) use a slightly different model, in which buying a box gets you every card available in that set, though until recently, you’d have to buy multiple sets to meet the playable limit of some cards.

Outside of constructed, which is basically building your deck away from the event and bringing it with you, there are ‘limited’ formats in most games. The way they limit the pool differs, but it falls to two broad categories: Draft and Sealed.

Sealed is a style of game play in which each player is given a number of sealed packs of cards and are allowed to build their deck out of the contents of those packs. Magic: The Gathering uses six packs for their Sealed events.

Draft is similar to sealed, but includes a ‘drafting’ period, in which each player may pick cards for their personal pools from a selection produced in various methods. The key point in draft is that you will be given some information on what your opponent’s are playing from the cards you get to see during the draft.

When it comes to this game type, I’m addicted to limited play, mostly because I really enjoy the deck building aspect of card games, and the immediate feedback from play helps me learn very quickly what works and doesn’t.

For new players who haven’t gotten to experience a TCG but are curious about it, I definitely suggest trying a demo of the game first, followed by trying some games of sealed play. This allows you to build your collection immediately, and gets you a taste of what real games are like.

I guess I can’t really leave this without mentioning some actual TCGs, though.

My favorite TCG is The Spoils, a game built from the ground up to be a competitive game. I will say it is less family friendly, since coarse jokes and high levels of violence are depicted across many cards. It carries a 13+ label, and I generally stick to that when running demos.

The game is a lot of fun, and very tactical as far as TCGs go. It has a lot of unique mechanics and some very fun choices to be made from turn to turn.

The other game I’ll mention because no discussion of TCGs is complete without it is Magic: the Gathering. The game has had hiccups over the years, but it’s generally a solid game, and it’s limited play is a blast.

It really is the grand-daddy of the modern TCG, and many of the things it started are still in use across the TCG industry as staples of the genre.

Anyone here ever play any TCGs? What do you think of the idea of building your own deck to play a card game with?